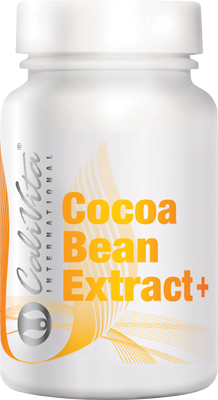 To whom and when do we recommend it?

The brilliant effect of cocoa beans on the human body was already known to our ancestors: they used it as a stimulant and an aphrodisiac. In the 19th century, pharmacies began selling this unique ingredient as an excellent mood-enhancer.

A portion of joy

Each of us experiences a feeling of pleasure when consuming a square of chocolate. However, this effect disappears quickly and remorse appears that we have again been tempted to do something that is not entirely healthy for us ... Sweets not only adversely affect the figure and heart, but can also, among others, cause tooth decay. And yet the effect of chocolate on our mood is due to the active ingredients of cocoa beans, not the sugars or fats added during its production. By reaching for chocolate, we provide the body with a real caloric bomb - 1 chocolate bar is over 500 kcal!
Importantly, the less cocoa beans in chocolate, the more we have to eat them to get the better effect of improving the mood and recharging with energy.

How do the active ingredients of cocoa beans work?

Cocoa beans also contain valuable flavonoids and theobromine.
But that's not all: Cocoa Bean Extract + has been additionally enriched with Goji fruit extract.

Cocoa extract, gelatin, stabiliser (cellulose), goji extract, anti-caking agents (fatty acids, silicon dioxide, magnesium salts of fatty acids).
Keep out of reach of young children. The recommended daily dose should not be exceeded.
Food supplements should not be used as a substitute for a varied diet.
Keep tightly closed in a cool, dry place.
Produced for: CaliVita International B.V. Beursplein 37, 3001 DC Rotterdam, The Netherlands
Best before: see side of pack.
Recommended:

Why Choose
Keywords: Cocoa Bean Extract, Goji Extract
Capsule of luck
In today's busy world, more people are suffering from stress, anxiety and depression. According to the results of our vitamin test results which so far has fulfilled more than 25,000 people, these issues affect our members, because every fifth respondent marked the symptoms associated with some of those health problems. For this reason, we have developed our new product, Cocoa Bean Extract + containing extract of cocoa beans.
Luck without fat and sugar
The effect of chocolate for improvement of mood is not associated with a sugar content - in fact, the effect of improving mood almost instantly is replaced by feelings of guilt in those who eat chocolate to satisfy the desire for sweets - but with the other ingredients of cocoa, which also affect the nervous system, such as theobromine, caffeine and flavonoids.
Relax!
One Swiss study confirmed the calming effect of cocoa Among the respondents, who were under a lot of stress, after two weeks of taking 40 g of dark chocolate decreased levels of stress, which after the tests stayed at low levels. In addition, cocoa contributes to increasing the circulation of blood to the brain which in addition affects mood and the mental achievements.
Mental freshness
By increasing the blood circulation in the brain cocoa active ingredients can be effective in preventing or slowing down of dementia and can contribute to alertness, concentration and quick thinking. In a study in which participants received 520 mg of flavonols from cocoa there was a significant improvement of attention in comparison to the placebo group. The second research using tests measuring memory and reaction time confirmed the improvement of vision and mental abilities after taking dark chocolate. Scientists suspect that the beneficial effects of cocoa on memory, learning, vision and reaction time can be related to the fact that cocoa improves blood circulation in the brain.
Cocoa can help preserve psycho-physical health as well as faster and easier to perform everyday tasks without the added fat and sugar. Try our new product Cocoa Bean Extract + in which the positive effects of cocoa is further strengthened extract of goji berries.
Who do you recommend?

Cocoa food of the gods - Interesting facts about chocolate and cocoa

Chocolate is now mentioned in the context of caries, obesity, high blood pressure and diabetes. However, numerous studies have confirmed the effect of valuable active ingredients of cocoa just to fight these health problems. Although this may sound contradictory, explanation is actually simple. The high content of sugar and fat in chocolate contributes to the development of these diseases, in addition to when the production loses much of bioflavonoids and in the end those who remain can not be absorbed due to the the milk that is added to the production. But we do not have to give up the protective effects of cocoa because there is now Cocoa Bean Extract +, which contains a high concentration of quality extract of cocoa beans!
Recommendation for the heart
The positive effects of cocoa on health has began seriously to be studied when it turned out that in Indian tribe Kuna there was no cardiovascular disease thanks to the daily consumption of cocoa.
However, the protect role of cocoa for the heart is confirmed today by scientific researches for example a study conducted in the Netherlands recorded a small number of cases of high blood pressure and mortality from heart and other problems in older men taking more cocoa.
Cocoa contains a number of flavonols which in multiple ways protect heart health: helping establish normal blood pressure in that dilate blood vessels, inhibit platelet aggregation and thereby protect against thrombosis and blockage of the arteries, which is confirmed and even in smokers.
Also, regulate blood fat levels and thus provide protection against atherosclerosis. Several studies have confirmed the reduction in LDL and total cholesterol after only 2 weeks of consumption of chocolate rich in flavonoids, while increasing good (HDL) cholesterol.
Diabetes sugar-free
The same research has shown that cocoa flavonoids in just a short period of time can reduce insulin resistance (which causes diseases such as type 2 diabetes, PCOS, metabolic syndrome) in people with high blood pressure. Similar results were obtained in another study, which confirmed that in patients with impaired glucose tolerance and high pressure there was a decrease in blood pressure and improve insulin sensitivity and function of beta cells which produce insulin due to the intake of flavonoids from cocoa.
Weight Loss with cocoa?
A recently published clinical study confirmed the efficacy of cocoa in diets for weight loss. The subjects were divided into three groups: one group was on a diet low in carbohydrates, the second group had the same diet enriched with 42 g of chocolate with a high cocoa a day, while in the third group eat whatever they wanted. At the end of the study, the group that received the chocolate had lost more weight (although the weight loss process with them began later) than patients in the first group, which means that a diet that includes a high proportion of cocoa can probably help successful weight loss. Although chocolate with high sugar content can hardly be included in the diet of people with the disorder of carbohydrate metabolism, we have a solution for this, because now we do not need chocolate in order to enjoy the benefits of cocoa!
sources:
• Cocoa and Cardiovascular Health - Corti, R., et al., Circulation. 2009; 119: 1433-1441.
• Aging, acculturation, salt intake, and hypertension and the Kuna of Panama - Hollenberg NK et al., Hypertension. 1997; 29: 171-176.
• Consumption of flavanol-rich cocoa acutelyincreases microcirculation and human skin - ignorant et al., Eur J Nutr (2007) 46: 53-56
• Chocolatewith high cocoa contentas a weight-loss accelerator - Bohannon et al., International Archives of MedicineVol. 8 No. 55